Review from "No More Grumpy Bookseller" ! 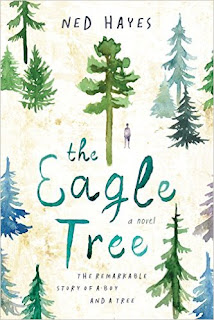 March loves trees. He knows everything there is to know about their ecosystems, the various species, and anything else pertaining to them. His real passion is climbing them, mapping out the routes in his head and planning which to tackle next.

His absolute favorite tree is the Ponderosa Pine. A rare and endangered tree, he never thought to see one in his home state. But while climbing the tree in his new backyard, he catches sight of a magnificent specimen. Known locally as the Eagle Tree, March believes it might be an elusive Ponderosa Pine. But when the land the tree sits on is purchased privately and under contract to become the site for a new development, March realizes the Eagle Tree is in grave danger. March's sole focus is saving the tree, no matter the cost, but doesn't realize that it could mean losing his mother in the process.

And it's told from the perspective of March himself.

Because of this, the reader is forced to see the world through March's eyes. Pieces of his story, as a result, are gleaned through inference or by piecing together clues March allows us to see. In between facts about trees and global warming, that is. It might sound strange, and again I blame the fact that it's very hard to sum up adequately in a nutshell while conveying exactly what makes this book so special.

I loved it. Absolutely and completely. And honestly, though I'd read and enjoyed Hayes's previous work, I really wasn't sure that this one was going to appeal to me. I'm glad my apprehension was proven to be without merit!

I really thought that Hayes did a magnificent job with March. Without experiencing it ourselves, many of us will never truly have a good understanding of autism and how it affects people. Hayes, through March, gives readers a chance to see that first hand and to understand how a mind like March's works. And though we don't see the story from March's mother or uncle's eyes, we do see, through March, how his autism affects them as well. It's a unique perspective that could definitely have had grave faults to it. Hayes, though, manages to handle it with respect and honesty, making March a real and sympathetic character.

I could probably go on and on speaking to Hayes's talent and how wonderful this book is but I really want you to grab a copy and see for yourself. Know this, though: Hayes is quickly becoming a favorite of mine and an author who can grab my attention no matter what I might be in the mood for. And readers, that struggle is real! I'll admit that this holiday weekend had me craving GoT level epic fantasy and I thought there was no way I'd be able to get into and enjoyThe Eagle Tree as a result. I was oh, so thankfully wrong. I breezed through most of March's story in one sitting and stayed up way too late reading the rest! Hayes and Eagle Tree are definitely on my highly recommended list :)

To see more stops on the tour be sure to check out the official TLC tour page here.