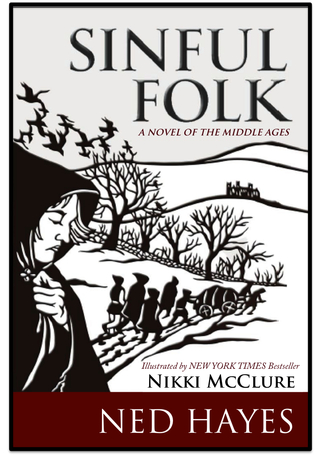 There are secrets behind secrets behind even more secrets in Ned Hayes'Sinful Folk. Just when you think you've gotten to the bottom of everything in this dark tale of justice, Hayes reveals something that turns everything around. And lurking behind the story is the actual history, making you wonder just how much of the fiction is actually fiction, and how much might actually have happened all those centuries ago. The writing is spare. Nothing is embellished. Nothing needs to be. But you'll need to pay attention to every word and take nothing for granted.

Five boys died a terrible death in December 1377. Their parents, maddened by grief set off from their village to seek justice from their king. Mear is our narrator and holds more secrets than most. She used to be known as Miriam of Houmout. She was a nun who fell in love with a prince, then had to run after the birth of their child. She kept his ring, but it's the only proof she has of what happened and who she really is. But for ten years, she has been pretending to be a mute man. She only spoke to her son, Christian. But after his death, she travels with the other fathers.

On their journey from the tiny, hidden village of Duns to London, almost every horrible thing that can happen to them does. They encounter bandits, impatient monks with too much power, weary knights, and famine-wracked peasants. Even the winter weather is their enemy. To make it all worse, it's clear that there is a traitor in their midst. Mear keeps her silence for most of the book as she pieces together what actually happened to the boys from the things her fellow travels let drop and her memories of other violence acts that happened in Duns.

The entirety of Sinful Folk is a tense read, but the revelations about Mear's past kick the book into high gear, especially at the end. There is a note after the conclusion about Edward the Black Prince that made me marvel at Hayes' virtuosity at taking a couple of medieval puzzles and weaving this story out of them. On the Black Prince's tomb, there are a series of alternating shields with the word "Houmout." No one has satisfactorily worked out what they refer to. Hayes created a small village that disappeared after the arrival of the Black Death. The village was Miriam's home until the plague left her an orphan and she was sent to a convent to be raised. From this one word and from a historical record that shows that the Black Prince was known to have lovers before his marriage to Philippa of Hainault, Hayes gives us the astonishing tale of Miriam of Houmout, known as Mear.